irowiki wrote:Now, the 2003 Buick Regal we had for a while, THAT was boring.

Zach's old car is a 2004 Impala LS that was my dad's and then my grandfather's. It was used by my dad as a work car for oilfield control stuff (he is an electrical engineer and sometimes works on site). You have my deepest sympathies. I think it's an absolutely horrible car and the fact you have to get under the car to access the back 3 spark plugs kind of proves there is no god. Oh, and the crossmember has to come off to change the oil pan gasket, which leaks. My Vibe is supposed to be the same, but you can pull it without dropping the crossmember. Also, ProDemand said the Imba Impala's labor time estimate was over twice that of the Vibe (even with dropping the cross on the Vibe).

I was excited to see the Camry, I thought it was pretty B-A.
But...did you try hitting it with a hammer?
Top

Yeah, we never replaced the spark plugs in the Buick, after reading about it, what I found at the time (this was 5 years ago) was that you had to disconnect some engine mounts then force the engine forward with a hoist to get to the rear plugs.

We're really stoked about the Camry, and she drives so smooth and quiet!
Former Tercel Enthusiast (not a practical family car anymore but they still have a place in my heart)

This afternoon's project, 6.5 speakers in 6x9 holes for the Camry wagon hatch.
You do not have the required permissions to view the files attached to this post.
Former Tercel Enthusiast (not a practical family car anymore but they still have a place in my heart)

PO spilled oil or something nasty on a floor panel in the hatch area... fortunately it was designed to pop out, and after a good bit of cleaning, it looks almost as good as new! Did you go with the smaller speekers because it's what you had on hand?
6x9 usually give better sound
Top

I was doing some research and "audio nut" websites were saying current 6.5 speakers generally gave better sound than 6x9 speakers, especially if you use them in woofer/tweeter setup like the camry has.

New 6x9's would not have fit in the hole anyway without some sort of adapter, and 6x9s are a lot more expensive!

Either way they sound great, a lot better then the stock speakers.
Former Tercel Enthusiast (not a practical family car anymore but they still have a place in my heart)

some day I have to up grade the old factory (very fuzzy) speakers and am/fm radio on my Tercel with something more modern and that sounds better. I have done it on both my daughters cars (at their insistance), but is a low priority for me, I usually only listen to news anyway. But even that is getting hard to understand sometimes, too much buzzing!
'87 Tercel 4wd SR5 (current engine swap project)
'84 Tercel 4wd (daily driver, with on going mods)
'92 Mazda MPV 4wd (wife's daily driver)
'85 Tercel 4wd DLX auto(daughter's daily driver)
'01 Honda Civic (other daughter's daily driver)
Top 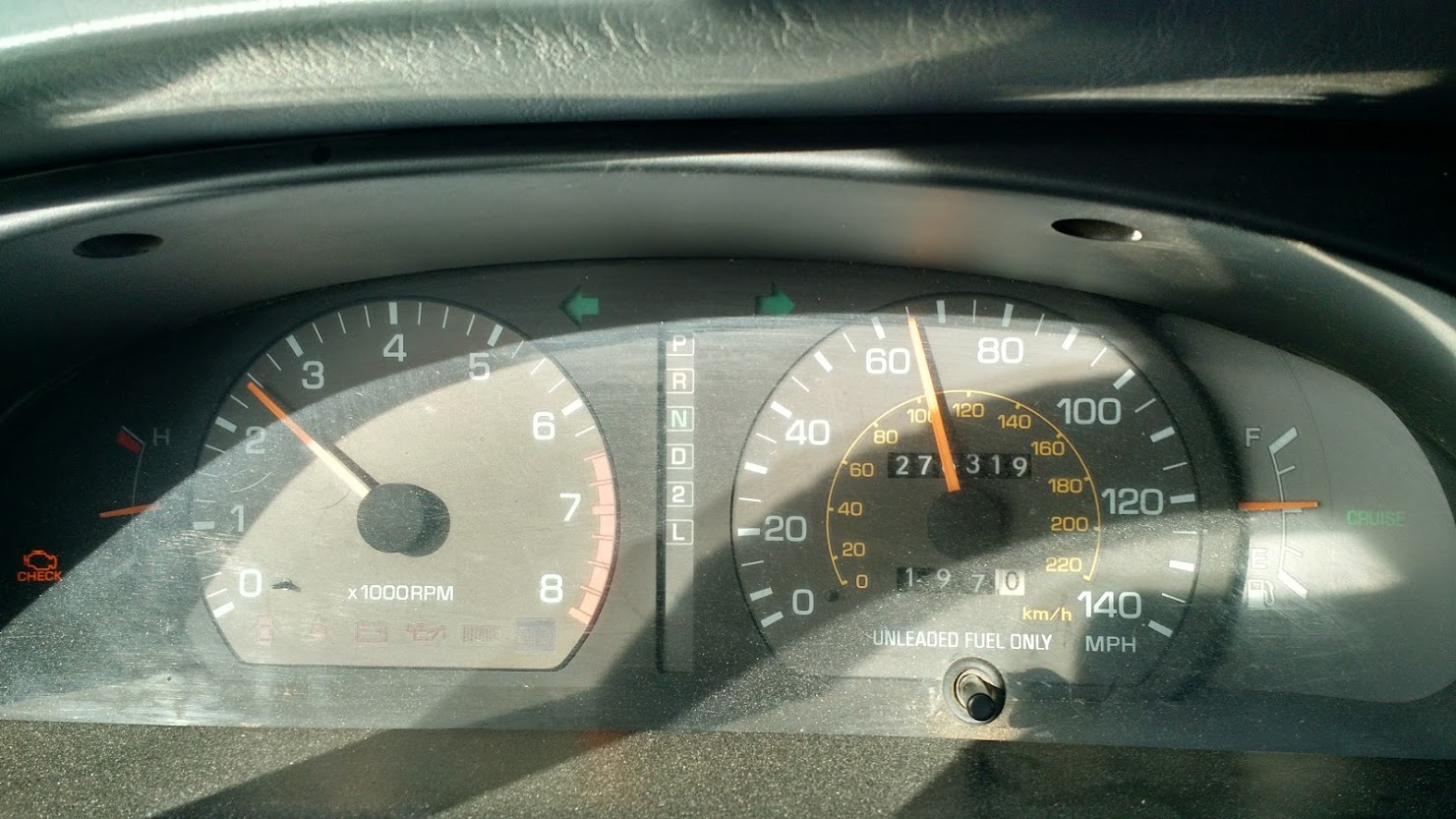 this is common for most of the modern v6 engines, they get all of their power and efficiency at the lower end of the rpm range. a V6 can do that and feel smooth and quite. most small 4 cyl engines get all their power at high rpms, so they are high reving and more noisy. One reason all the manufacturers have gone away from the 4 in favor of the v6.

Has nice lower end torque too!

There's a flat spot between 65-70 MPH in 3rd when going up a hill (the 3700 RPM range), I think it is knock sensor related, still have to fix that.
Former Tercel Enthusiast (not a practical family car anymore but they still have a place in my heart)

A few more shots for someone who was asking about speeds.
You do not have the required permissions to view the files attached to this post.
Former Tercel Enthusiast (not a practical family car anymore but they still have a place in my heart)

So Sunday, in heat approaching 100 degrees, I took the Camry all apart to get to the knock sensor that was throwing a code. Had to drain coolant, remove the plenum and the intake manifold. Replaced the autolite platinum plugs with NGK Iridium plugs, since all the rage on TN is that most newer toyotas are fussy and want Denso or NGK. Also replaced the Idle Air Control Valve because idle was being a little fussy.

Put it all back together, all told I think it was 6-7 hours of work. (Yeah, really makes me long for working on a tercel. It feels like we did the head gasket on the 87 quicker)

Anyway, started the car, set the timing properly (stock is 10 BTDC, but TN likes 17, so I'm trying 15), actually tightened down the distributor, and that darn CEL is still up for that rear knock sensor. Okay at this point it's either the wiring or the ECM. I grab a spare ECM out of a junked car, swap that in, (only takes 5 minutes to take the glove box out to get to it) and same problem. So the wiring between then ECM and the knock sensor harness is bad.

Argh! So I think I'm just going to splice the working knock sensor feed into the non working feed at the ECM and call it a day.

Otherwise, with the new plugs, and the timing actually set right, it feels like a different car! Picks up from a stop much quicker and the dead zone in third between 60-70 MPH is gone.
Former Tercel Enthusiast (not a practical family car anymore but they still have a place in my heart) I had wondered about plopping the Matrix 1ZZ 4WD setup in.

It would be stupidly awesome. 123 hp and a stronger transmission and differential? yes thankyou
But...did you try hitting it with a hammer?
Top
Post Reply
53 posts