Since I can't seem to get the "search" for this web site to work I will ask the question which I'm sure has already been asked.
Problem: i'm getting only two speeds for the heater blower.
I replaced the dashboard control switch for the heater blower but still only have the same two speed settings that work.
Question: what really controls the blower speeds? And where is it located?
Love those Tercell 4x4 wagons but they sure suffer from road noise.
Top

There are 3 resistors that control the blower (the high setting doesn't use one) between the switch and the motor. It's been a long time since I've worked on one of these so I don't recall what each one looks like. Should be fairly easy to figure out though. Sometimes the contact points on the switch get dirty as well. Again, it's been a while so I hope I'm remembering this correctly.
Oh look.......another broken part.
Top

The resistor pack is a relatively easy no-dollar fix if you're up to it. Pull the glove box (2 screws), and the first two defroster tubes (also 2 screws). remove the one screw holding the resistor pack in (it's behind the defroster tube that's more to the center) after disconnecting the wires. You'll see 3 coils of resistor wire. Each speed uses one or more coils to reduce the voltage going to the blower motor (It's a voltage divider if that means anything to anyone else). you'll notice that one or two (probably two since you only have the two higher speeds) coils are broken.
Now comes the farmer-tech. get out a small, pink insulated crimp connector (any kind except for a butt splice) holding the connector portion, rotate the insulator off, and then trim off the connector itself-you want the part that crimps down on the wires, put the resistor pack GENTLY into a vise, and put the two free ends of the broken coil into the crimp and clamp the p*** out of it with a pair of small channel locks. DON'T try to solder it, it's Ni-Chrome and won't solder -you'll just melt the connector. If you can't pull the two ends out, it should work- you can check it with an ohmmeter if you have one. reassemble.
If the ends of the coil are too far apart, the ceramic that holds it to the support isn't too strong, so use a SMALL pair of pliers and GREAT CARE to remove the next coil attachment to get enough wire to do the deed.
I did this on my SR5 7 years and 100 k ago and just had to redo it a month ago.
'83 SR5-299K, -tRusty!
'85 SR5-265K--GOLD
'85 SR5-285K-- GOLD-New engine!
'85 SR5-238K -- Teal-Killed by a DD
'58 and '62 Austin-Healey Sprites
Top

You the man!! Since I live in Panama, this particular item has been just another piece of "unobtanium". I have been looking for two years here. Not too high on my priority list as the top two speeds worked. The smaller of the 3 coils had a break in it. I jumpered it as you described and now I have all 4 speeds. Hallelujah!
Top

I saw one guy on another forum got a newer resister from a 2001 rover, and soldered the coiled wires into his 1987 integra resistor.

I just went and got a new resistor from Toyota for like $30. It blew on me like a month or two later, so I had them give me a replacement for free.

took Highlanders advice fixed it.
thanks
Love those Tercell 4x4 wagons but they sure suffer from road noise.
Top

Highlander, thanks for posting this. I'm resurrecting it because it is a great thread. But I am still having problems.

My heater blower motor suddenly carked it and after replacing the fuse. I could only get it to work on full speed and not the 3 other settings (A/C is also working on full speed in eccon and full). There was a strange noise coming from the intake fan on the passeneger dash side where I noticed a pen from my overloaded glovebox had made it's way into the fan and was being held in by it's little clip onto the plastic grating infront of the fan and was rubbing on the fan.

So after removing said pen I scoped out this thread to answer why 3 speeds of my fan are not working now. After taking out the resistor which was exactly as you said I was checking it out as it seems very fragile and corroded in some parts I accidently broke the thickest of the three loops in 2 place. I will try and fix this in the manor that you stated yet, I'm not sure that this is the problem as the other loops seem all right and the it would seem strange that all 3 of the lower settings stopped working at the same time, does anyone know if there is an extra fuse or hardware that I am missing as I endevour to fix this?

this white stuff over the coils, this is the insulation you were speaking of?

OK, I haven't crimped anything before (I have soldered though!) and live in a mechanical black hole called the inner city (so basically you guys are all I got). Anyway I'm trying to fix this coil and then check through to see what else could be causing 3 middle speeds of my blower to cease. I've been checking a few google images out and basically am not sure if a butt splice is the same as a butt connector? as I guess this is the closest to what I need. Although as you might note in my photo the breakage is in the middle of the coil (a bit of careful bending might be needed)

Will I need to get a crimping tool?

also. If this is not the problem with my heater/blower does anyone have any recommendations?

now the high speed does not work
seems odd that the high speed will not work since the resister does not control that
the only speed working now is the speed just before high
Love those Tercell 4x4 wagons but they sure suffer from road noise.
Top

Hey Mattel- The white stuff is some sort of ceramic to hold the coils from vibrating and fatiguing to failure (though that is what eventually happens anyway). The butt connector is a butt splice (in my parlance) and the inner piece is just too long to crimp the coils into. Get a terminal (ring, spade, or disconnect) for the smallest gauge wire that you can (smaller= larger #-- i.e.24ga is smaller than 10ga) twist the insulator(the colored plastic) off of the terminal you bought, and then using diagonal cutters, lop the terminal from the piece that the wire goes into-(looks tubular-that's what you need to keep). I use a very small pair of slip joint pliers that look like channel locks(see pic)-they're only about 5" long- and put BOTH broken ends of the coil through the tubular piece from the terminal so that they overlap. Then, using the very tips of the pliers across the tube, crush the stuffing out of the tubular piece. if you can't pull them out, then it's about as good as it'll get.- You can test it by plugging it in but not putting it back in its hole, and turning the fan on.
Since the circuit runs through the smallest of the coils on any setting but high, if you have an open in that coil, then the circuit never is complete. Likewise, if you have an open in the second coil, the lowest and next to lowest won't work etc. etc.
Xirdneh- I think you've got an open in the middle coil that's resulting in no lower speeds. Its odd that the high speed won't work, you might check the heater relay- The resistor pack is a set of shunt resistors (ie it eats up the power so that the fan doesn't have full current) if you check the FSM, the heater relay supplies the full speed connection for the fan. When the relay is stuck open, everything should work BUT high speed [EDIT Wrong! relay is the first resistor in the circuit Cross A-7 in the wiring diagram]- I use an ohmmeter to figure out which coil is broken if I can't see the fracture.
Good Luck Guys, my fan works, but it's not putting out much heat-it's 1°F here at 2 pm and sunny today.

Hey Highlander, are these ignition pliers what you were trying to post? 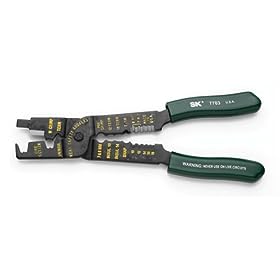 I'm off to the radio shack (or "Tandy electronics" as it known here) at lunch, thanks again for the detailed and concise info. I guess the part that I need looks like a "B" in section with the wire going in both holes and then crimped down so they won't pull out

1/ can I use some needle nose pliers that I already have or do I need these fancy ignition pliers?

BTW.. Did you go and see that recent film about my home country as you sort of know the lingo? May I recommend a better film called "Chopper" instead? This local character (played by Eric Bana) lives about 500m from me and was in the news yesterday for having a punch on involving a tomahawk and a metal pipe... good times!