Very true on aftermarket manifolds. They seem to be almost unreasonably expensive sometimes.

Have you considered cutting/shortening the runners on the RWD manifold at all? That was something I considered doing if the 4A-FE manifold didn't
clear with my plans. Not sure how that would affect the performance and T-VIS stuff. I suppose that has it's own set of challenges too.
1987 Tercel Wagon SR5 4WD
1997 Acura CL
RIP 2016 Civic (wrist pin recall)
Top

Make no mistake the 4AG engine is fun, can sound good, and preforms well for the age of the design, but $600+ for manifolds that are, at best, just copies of someone else's design with the hope that they got it right (aka not even a basic CFD analysis) is exorbitant.

Making the runners shorter is a possibility, but isn't as straightforward as it would seem. Of the two sets of runners the inside are straight, but the outside runners taper outward pretty quickly so there's only a small area that can be removed to shorten them. So my current ideas (generally in order from easiest/cheapest to more involved/expensive) are:
Here's some photos of a guy in Europe that did a 4AGE swap at stock ride height and the 2" spacers he made to drop the crossmember. 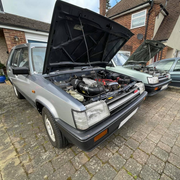 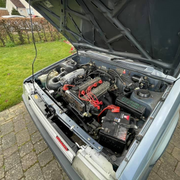 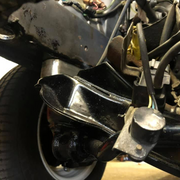 there are three other possibilities you did not consider on making the manifold fit:

cut the manifold just after the taper/flange, and than cut a "V" shaped wedge off the mating side so when you mate it up, it rotates the plenum down and out, giving more top clearance. And it will not change the runner length much. problem is it would take a fairly precision cut, and a good air tight weld to put it back together.

Another alternative I have thought about, cut the mating gasket face of the intake manifold at an angle, so when matted to the TVIS, it would rotate the plenum down. this can be done in a milling machine in a single mount out, but the mounting bolts would need tapered washers to hold it to the side of the engine.

if you want to convert to 4 motor cycle carbs, and eliminate all of the EFI equipment, I have seen a DIY manifold done for a 3ac that could also work on the 4age. you cut off the flange of the intake manifold, counter bore the holes a bit, and epoxy in short lenths of metal tubes. than use a rubber hose and hose clamps on the short length of tubing to mount the carbs. it might even be possible to get curved radiator hoses to just replace the rigid length of intake manifold between the TVIS and the plenum. either way, it means sacrificing a 4age manifold for the matching parts. these would be doable in a well equipped home shop, but would take some messing around with the installation to get it all sorted out.
'87 Tercel 4wd SR5 (current engine swap project)
'84 Tercel 4wd (daily driver, with on going mods)
'92 Mazda MPV 4wd (wife's daily driver)
'85 Tercel 4wd DLX auto(daughter's daily driver)
'01 Honda Civic (other daughter's daily driver)
Top

Your first option I hadn't thought about and I'd definitely need to find a machine shop for that. I'm sure I can do so, just going to take time as it seems job shops around here are few and far between. Everyone wants commercial business and I can't blame them for that. I'm planning on staring at my car and contemplating options today and will turn the intake upside down to see if it'll clear everything over there (and measure the height at the oil fill) as it seems like just flipping the plenum will be miles easier than getting the V cut to angle it downward. Although now that I think about it if the taper is truly symmetrical all the way down toward the flange I could just cut it off closer to the flange and flip it there instead of near the plenum...

Second option: The owner of the photos in my last post actually did just that to get more clearance on his manifold. It's a good idea, but it's still sticking above the valve covers on his engine and I don't think it'll give enough clearance in the 7AGE case; might drop it from 4" of needed clearance to 3.5".

Petros wrote: ↑Thu Apr 15, 2021 1:32 am if you want to convert to 4 motor cycle carbs, and eliminate all of the EFI equipment, I have seen a DIY manifold done for a 3ac that could also work on the 4age. you cut off the flange of the intake manifold, counter bore the holes a bit, and epoxy in short lenths of metal tubes. than use a rubber hose and hose clamps on the short length of tubing to mount the carbs. it might even be possible to get curved radiator hoses to just replace the rigid length of intake manifold between the TVIS and the plenum. either way, it means sacrificing a 4age manifold for the matching parts. these would be doable in a well equipped home shop, but would take some messing around with the installation to get it all sorted out.

Has anyone made any posts on making DIY bike carb manifolds for the 3A-C?
I've thought about seeing if some Mikunis would play nice with it, but it was mostly hypothetical thoughts.
1987 Tercel Wagon SR5 4WD
1997 Acura CL
RIP 2016 Civic (wrist pin recall)
Top

Update, 3" should be plenty to clear the oil cap, and there's tons of room to flip the manifold. Manifold is actually sitting higher than it would in this picture because I just slid it over the mounting bolts and it's actually above the ports, but gives you an idea. Will do some checking around to find somewhere to get it cut about an inch from the flange and if there's someone that has some hot tank services as the manifold is full of carbon, old oil, and crap from the previous owner that'll just make welding it back together absolute hell. Going to 3D print some test spacers and order longer bolts or threaded rod that I'll cut to length from McMaster. 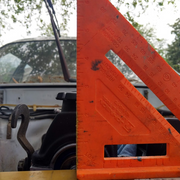 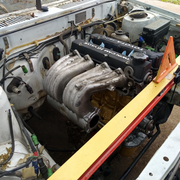 Kozuto_98 wrote: ↑Sat Apr 17, 2021 1:21 am Has anyone made any posts on making DIY bike carb manifolds for the 3A-C?
I've thought about seeing if some Mikunis would play nice with it, but it was mostly hypothetical thoughts.

here are links to the old threads with motor cycle carbs mounted in Tercel4wd, unfortunately the links to the pictures are no good anymore:

here are a few pictures I found on the internet, one is an AE86 (RWD) with a motor cycle carb conversion.

Petros wrote: ↑Sat Apr 17, 2021 7:57 pm Interesting, how will that work with a power steering pump mounted in front of the throttle body?

The flipped manifold idea looks really interesting. It's too bad you're not in the Seattle area, I could hook you up with the fab work no problem

So measuring from the bottom of the hood line to the top of the oil caps says the engine sits 2.75" above the hood line, right?

If I put the hood back on and let it rest on the top of the oil cap there's only a half inch gap to get it to close. 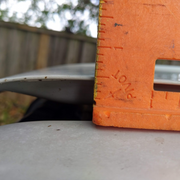 Showing there's some complex geometry going on between crossmember, engine, and hood to get it to clear and I'd like to lower the crossmember as little as necessary. The hood is also just sitting on the hood hinges in the above picture, but not bolted to them at the moment, so that's causing some discrepancy in the measurements as well.

I'm happy to report that only a 2" crossmember drop is necessary even for the taller deck on a 7AGE. There isn't enough space for a 1" to work, but enough space to account for engine movement and 3" drop won't be necessary.

I'm pretty sure I don't want to do a 3" drop, seems to be counter to the whole idea of greater ground clearance with the lift, that said the measurements put the intake manifold a little under an inch above the oil cap and so theoretically a 3" drop would clear the factory intake manifold as well. I might test such this weekend before I go to the shop I found to cut the manifold, but no guarantees. 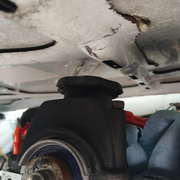 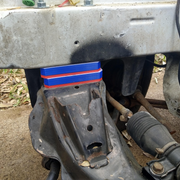 Had a minute before some plans this evening, so got out to the Tercel and dropped the crossmember, put in the third 1" spacer on each side, and tightened it all back up to see if the intake manifolds would clear. And well... 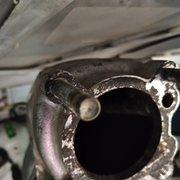 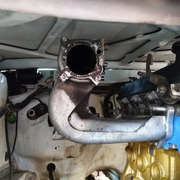 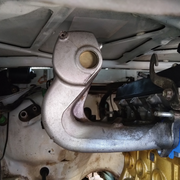 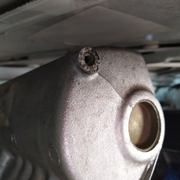 
However it looked/felt like a lot of clearance, as if just maybe 2" crossmember drop would clear. Being that I'm only willing to drop it 2" I was going to take the third spacer back out anyway, so it was worth a shot seeing if the manifolds would clear. Didn't do this first because the measurements said there's no way it should clear the hood. Well, guess what... 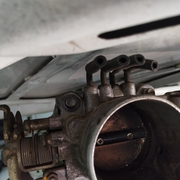 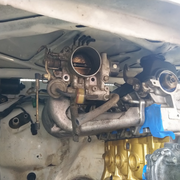 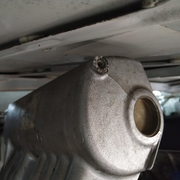 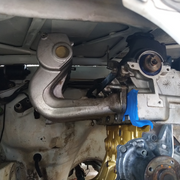 7AGE with factory manifold clears the hood with just a 2" crossmember drop!

If the RWD manifold is used then it'll need an aftermarket throttle body as the vacuum lines coming from the top of the TB are definitely going rub the underside of the hood as the engine moves (will check what each is for and possibly pull the barbs and plug the holes). FWD manifold and stock throttle body is a tight fit and will need a very small radius 90° right off the TB to not run into the firewall (or off the manifold and relocate the TB). I'll decide if I want to use the FWD manifold and stock TB or use the money I'm saving by not getting the manifold cleaned and cut on a "universal" throttle body and adapter (for either FWD or RWD manifold). I can't find any aftermarket throttle bodies for the 4AGE as everyone uses one that comes with their overpriced "racing" manifold or switches to ITBs. The stock fuel lines are in the way of the FWD manifold/TB, but that's a non-issue for me as I'm replacing them with all new lines from the tank. 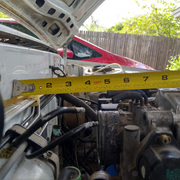 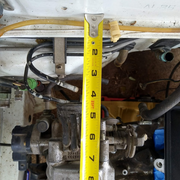 Measurements and images should be pretty representative of final product, but there will be some changes as the TVIS isn't mounted (so the manifold will move about 1/2" towards the passenger side) and the rear of the engine is being supported by a jackstand at the moment instead of mounted to the trans and held up by the trans mount, so angle and height of the rear will change a bit.
1983 Toyota Tercel SR5 - 7AGE swap in progress
Top

Dropping the crossmember is not a good solution for this swap. It will leave your control arms at an inclined angle that will hurt handling, unless you lengthen the ball joint and tie rod ends.

I don't think the tie rods have moved as much as you think, but getting/making longer tie rod ends is easy and I'll cross that bridge when I come to it should it be an issue.
1983 Toyota Tercel SR5 - 7AGE swap in progress
Top
Post Reply
32 posts

Return to “Tercel Gallery and Projects”