How-to's and repair secrets for your 4WD can be found here. Have a question? Ask it in here!
Post Reply
8 posts • Page 1 of 1

First off...my daily driver runs perfect most of the time. Sometimes (and with increasing occurrences in the last month) it stalls at idle. I've been feathering the gas when at idle or even when shifting to keep it from stalling. I was hoping if I drove it enough the problem would just go away but it hasn't...it's happening more often. It usually runs perfect in the morning when the ambient temperatures are cooler. For instance...today I left the house about 8 am and went to the dog park, parked and stayed there for about an hour, then to Home Depot (parked and shopped for about 30 mins), then to Goodwill (parked and shopped for 20ish mins), then to Trader Joes (parked and shopped for about 10 mins), and then drove home. Each time it started right up and caught a good idle and never stalled out. Then this afternoon (around 1pm) I drove to NAPA, Home Depot (again), and Walmart and it would not catch idle on any of the trips...had to feather the gas the entire time. Got home from that trip, parked her and then left about 5:30 pm to the dog park again and it ran perfect again. Leaving the dog park to go home I had to feather the gas again. It's been like this for a while now and it's getting frustrating. Any thoughts on to what the issue may be?

Secondly...in anticipation of having to rebuild the carb (and for practice) I'm rebuilding the carb off of my parts car. In the process I managed to lose the long spring under the discharge weight and the stopper gasket. I was hoping they'd be in the rebuild kit but they're not. Any clue on where I could get these parts besides another carb? Does anyone maybe have these laying around? I'm missing everything in step 8 (a) below except for the weight and the ball. I think the rebuild kit may have a new gasket but without the old one to compare I'm unsure which it is. I also didn't pull the retainer and ball in step 8 (b) below but I sprayed the crap out of it...do I need to pull it? 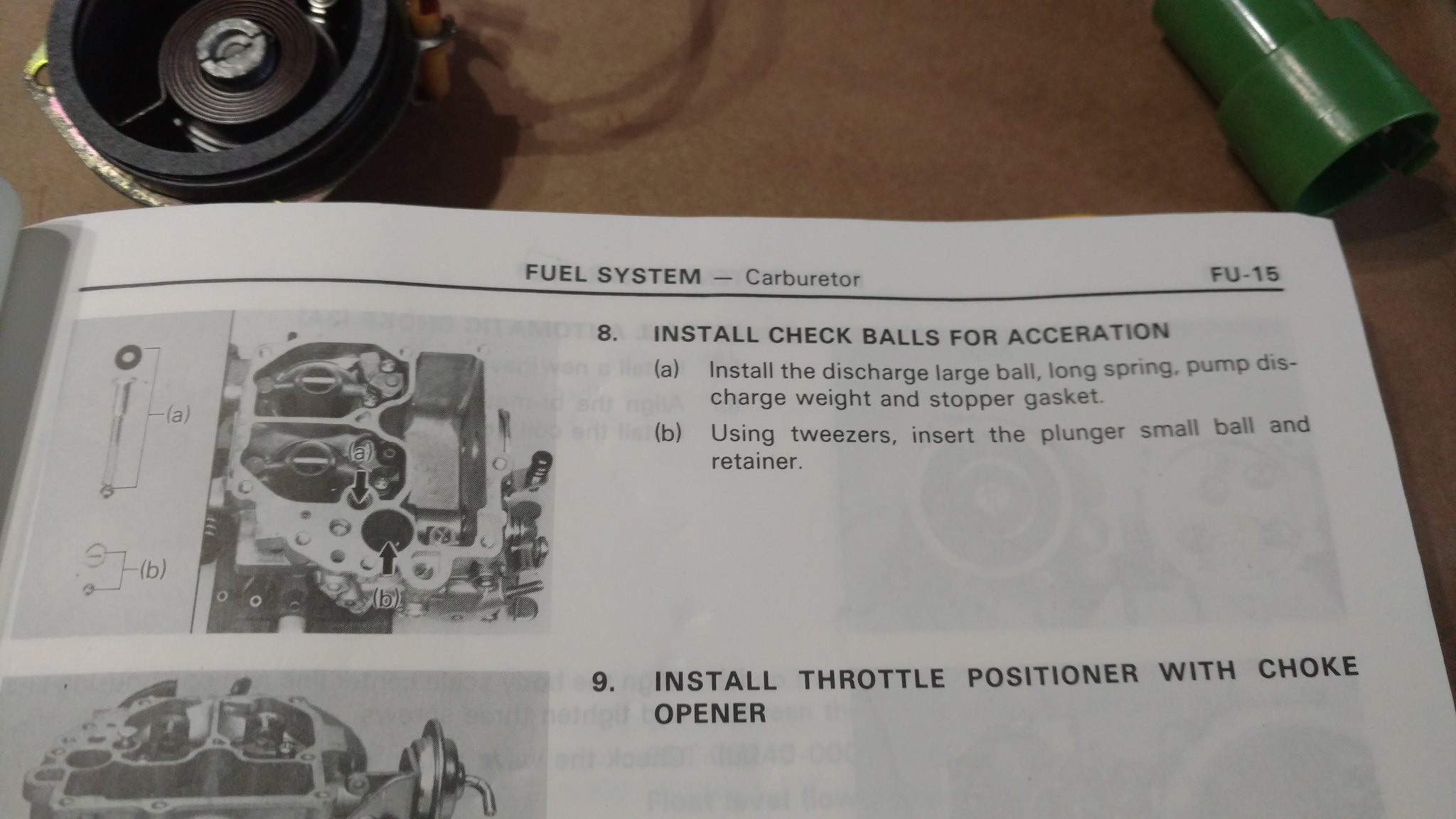 I also managed to mangle a screw that secures the thermostat casing...same question...know where I could get one or does anyone have an extra? 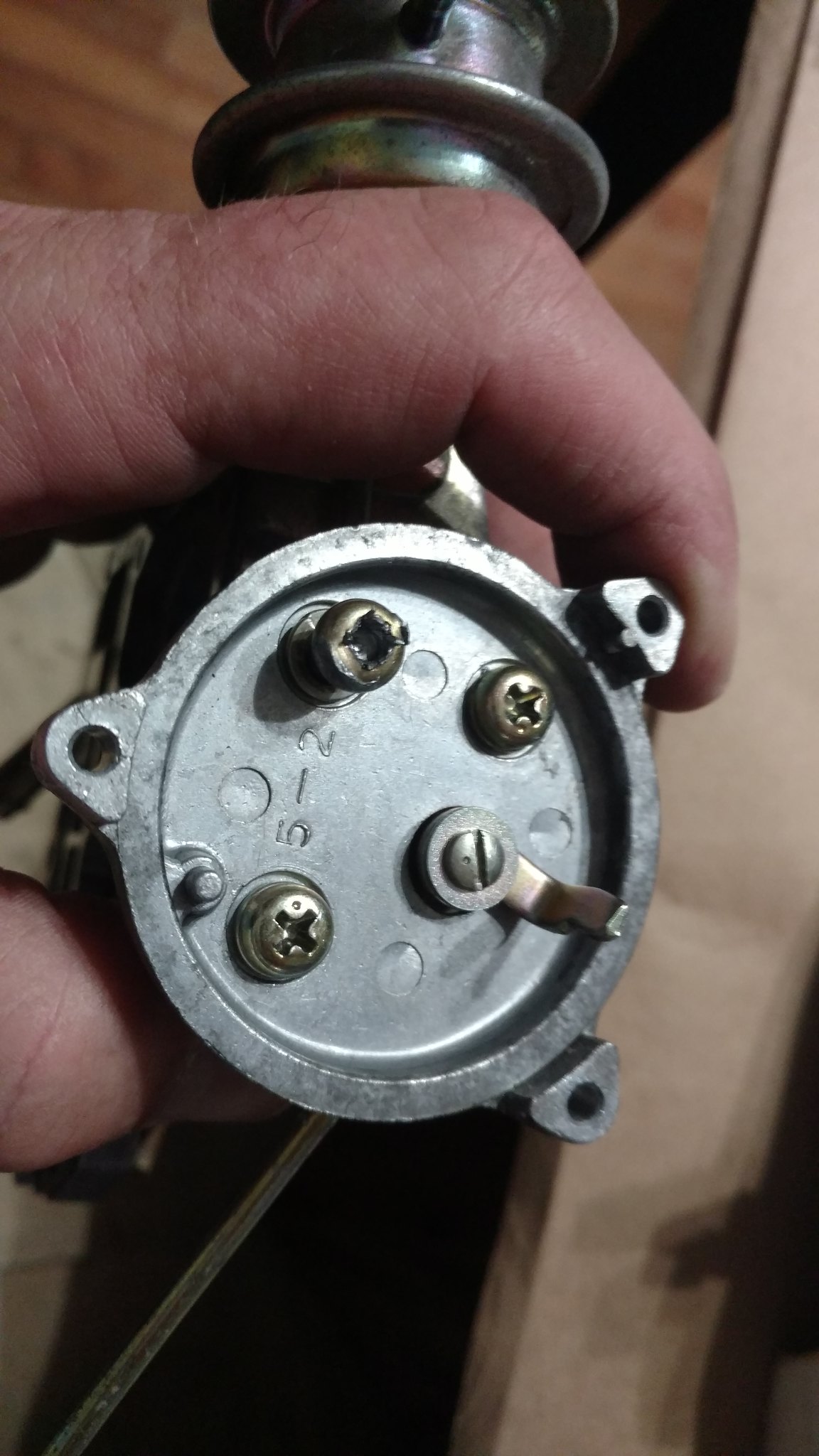 Another question...the FSM says I need to peen the screws on the choke valve but I have no idea how to peen a screw so I was wondering if I could just use locktite?

)...I couldn't pull the power valve but there's a new one in the rebuild kit...is it a big deal if I don't replace this? If so...what do I use to remove it?

Oh...and it looks like I need the two wire solenoid as well (not sure if that's primary or secondary at the moment). Idk what happened to the tip of it but it's not inside the hole where it bolts in. It still clicks when touching the leads to the battery terminals, although it's a fainter click than the other solenoid. 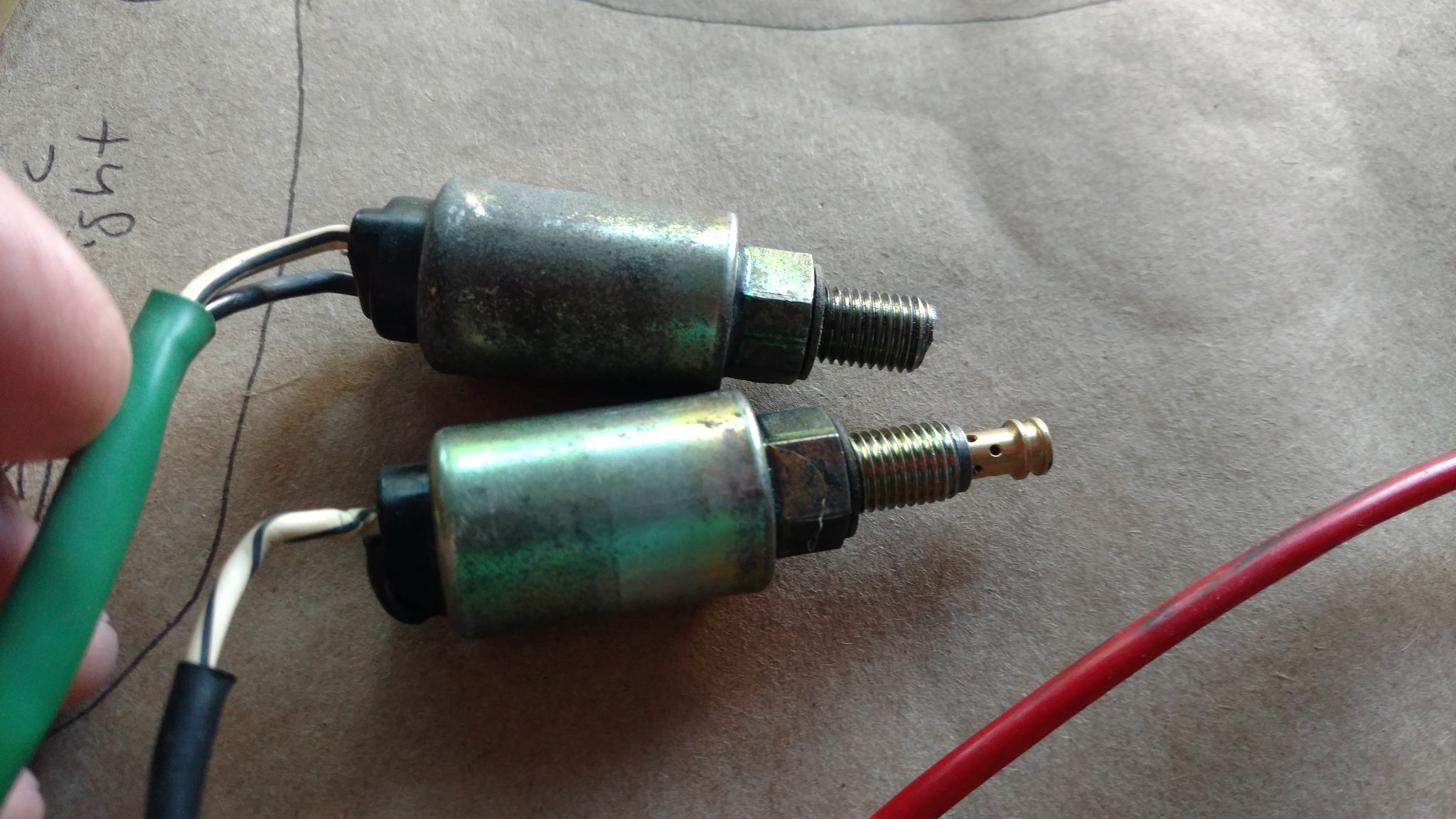 I just finished rebuilding my wagon's carb and have a box full of two additional carb's worth of parts, including the springs and solenoids. If you're interested I can set these aside for you along with the headlamp parts.
1975 Subaru SuperStar wagon
1984 Subaru Turbo-Traction wagon & Turbo-Traction hardtop
1987 Subaru RX 3-door, x2
1987 Subaru RX Type-RA 3-door
1987 Toyota Tercel SR5 wagon
1999 Subaru Forester S
2002 Subaru WRX sedan
2019 Subaru Outback 2.5i Limited
Top

That would be fantastic! You're gonna have to dedicate a shelf to me soon, hah. I'll be over your way this weekend or next.
1977 BMW R100S 1WD ("Brunhilda"/Summer Fun)
2007 Tundra Limited Crewmax 4x4 ("Tetsuo Shima"/Hauler) SOLD

some people cut the end off to disable it. it becomes a plug
the early carbs have two wire solenoid on driver side
late models have two wire solenoid on aft pass side
good ones click when they get electricity
the aft pass side is for the primary barrel
when ignition is in run position the aft pass solenoid should be getting electricity continuously
there is a carb video on youtube
i should have that spring
Love those Tercell 4x4 wagons but they sure suffer from road noise.
Top

if the power valve operates normally, and is clear of scale, you can leave it in place.

xirdneh...I'm not sure which side the solenoid was from at the moment but I'll look at my pictures later but I'm assuming it's the driver side as it's off an 83. Are you saying that it doesn't need the tip on it to function properly?

I found your video...haven't made it all the way through yet but it's been extremely helpful. I'd love to come grab that spring from you...any chance you have that screw I mangled too? I'll give you a call this evening.