as long as you don't adjust the tie rod or camber adjusting cam, the alignment should be the same when you put it back together. i've never had a camber adjusting cam move freely when the hub-to-strut bolts are removed but it is a good idea to mark its position before disassembly, just in case.

for checking toe in/out, i really like keith's method and have used it a few times.

It only clunks while I am driving. Not from a stop. Still strut mount possibilities?

yup, i'd say so. you should still check everything else like engine mounts and whatnot, but strut mounts are my bet. you said it happens when you have shifted into 3rd and are letting the clutch pedal out, yes?
Top

It seems to be more intense when I am on and off the gas pedal in 3rd gear...when I am traveling around 25 to 30 mph. I don't have to be doing anything with the clutch. Never when stop to go. The trans shifts super smooth and makes no noise. It was completely rebuilt 30k miles ago.

I will definitely be checking the strut mounts. Any suggested brand or will an autoparts store brand be sufficient. Will it cause any major damage if I drive it this way for just a while. Funds are a little short right now.

I went with KYB - check the OEM and AM Parts Numbers Forum for the correct part numbers.
Tom M.
T4WD augury?
"Oh, do not ask, 'What is it?' Let us go and make our visit."
T.S. Eliot - "The Love Song of J. Alfred Prufrock"
"Now and then we had a hope that, if we lived and were good, God would permit us to be pirates."
Mark Twain
Top

the symptoms you describe sound very similar to what lots of others have described, and what i experienced with a few of my tercs. do check the front end over. the slight clunk won't hurt anything, worst that will happen is it might get more noticeable but even that would probably take a loooong time.
Top

I recently changed over to Redline MT-90 synthetic fluid. Here's my initial report from the "Unhappy" thread:

The Professor wrote: ↑
Thu Nov 12, 2015 8:28 am
I finished swapping out the gear oil in my Tercel's transmission and rear axle with 80w/90. The old oil looked to be in pretty good condition, it was a dark amber and didn't smell as awful as black, ancient gear oil. Ditto on the rear axle.

Before, the trans would shift OK, but would nip the gears a little on the 1-2 and 2-3 upshifts. After the fluid swap 3rd gear will grind if you hustle the upshift. It's fine if you shift slowly and smoothly. I drove it a few miles and things didn't seem get any better. I'll have to go for a longer drive to see if higher temps help the shifting, but as for now, I'm considering draining out a quart or so and tossing in a quart of synthetic, as suggested.

Also, does anyone know the name of the engineer who designed this transmission? I have a few choice words for him. If you're familiar with Subarus, they have essentially the same engine/transmission layout as a Tercel. The difference is, the front diff is internal to the transmission case, there is only one drain plug, and, gasp, a dipstick and fill tube!

4wdchico wrote:Once again I will state that I believe that Redline 75-90 NS is the best lube for the t4wd trans.

Cut and paste from the above link:

Offers quicker shifts, perfect synchronizer coefficient of friction
Safe for brass synchros, as it lacks the reactive sulfurs found in most GL-5 oils that cause damage
High performance gear protection and longer synchro life
Eliminates notchy shifting, even when cold


I'm about to order some and will check back in to let everyone know how it does. My main problem at this point is a crunchy 3rd gear syncro that was not present before I did a trans oil change.

I finally got around to changing out the transaxle fluid, since I was already poking around with the neutral return piston. As you can see from my prior posts, I started with some minor balking on upshifts when I originally bought the car. Swapped the fluid with generic 85W-90 dino-based gear oil and while the 1-2 upshift improved, the 2-3 upshift got worse. If I shifted any more quickly than "lazily" I would notice a bit of a grind going into third gear.

After doing some research, emailing different suppliers I settled on Redline MT-90. This is a GL-4 oil, the proper fluid for our transaxles. The reason this is important is that GL-5 oils will adhere to the brass synchros in our cars and as the oil and synchros do their speed-matching-dance, tiny pieces of brass are literally being ripped off the synchros. Modern GL-5s are even worse.

The gear oil I drained from the transaxle a few days ago had been in the car for a few years, but only had a few thousand miles on it. You can imagine my shock and utter disbelief when I saw how much brass dust was suspended in the old gear oil. I'm no talking about some flakes or shimmering tailings at the bottom of the pan, but spread throughout the entire 4.1 quarts, suspended, like a grey/green/gold flaked paint job. THIS is what GL-5 does to our transaxles! (Pics if I remember)

So here we are, transaxle drained, refilled with Redline MT-90 and WOW! This faintly pink fluid completely eliminated the 2-3 upshift grind. In fact, I couldn't get the transaxle to grind AT ALL upshifting or downshifting throughout the gears. I need to pump up the tires and take her up the grade of Snoqualmie Pass to get everything nice and hot before I'll officially sign off on the fluid, but there you have it. A pure, 100% ester-based GL-4 synthetic gear oil that IS NOT "too slippery" for our transaxles. 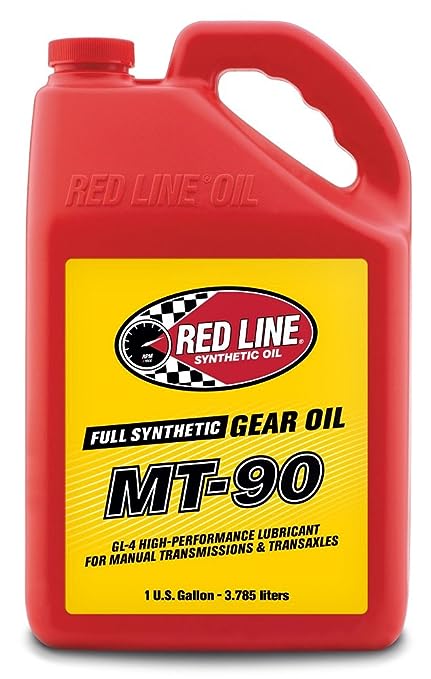 good post, and I also lament the absence of filler tube and dip stick on the manual trans. oddly the oil change interval for both auto trans and manual trans is 30,000 miles, yet all auto trans cars come with a diptick and filler tube, making checking, topping off, and changing gear oil much easier. No reason manual trans should not have one either. Perhaps it is just tradition that manual trans never did, but this is common with most cars. Honda is the notable exception, easy drain and refill on their manual trans.

I thought about rigging a dip stick and filler tube on my Tecel4wd, should not be too hard, you just have to adapt one from a auto trans. but I have not tried it yet.

Every Subaru that I've owned from '75 to 2014 has a transmission dipstick, so Honda's not the only one.

"Lifetime" lube means lifetime of the original ownership period, otherwise, there is no such thing as a lifetime fluid, for any application.

The manufacturers think differently than us on lube schedules for just about everything but CVT's. Dipsticks are slowly going away on all cars. I'm sure Subaru will catch up.

The auto's without dipsticks are serviceable but not easily as they are filled thru the drain plug. I had to get one of these quite a while ago.https://www.amazon.com/Mityvac-MV6410-A ... ay&sr=8-2
Top

splatterdog wrote: ↑
Tue Aug 06, 2019 9:39 am
The manufacturers think differently than us on lube schedules for just about everything but CVT's.

I work for a vehicle manufacturer and literally write the maintenance intervals, so I know what they're doing. Has everything to do with "cost of ownership." That's why you see so many new vehicles with a year or two of free scheduled maintenance.
1975 Subaru SuperStar wagon
1984 Subaru Turbo-Traction wagon
1984 Subaru Turbo-Traction hardtop
1987 Subaru RX 3-door
1987.5 Subaru RX 3-door
1987 Subaru RX Type-RA 3-door
1987 Toyota Tercel SR5 wagon
1999 Subaru Forester S
2002 Subaru WRX sedan
Top

the federal goverment a number of years ago asked the car makers to reduce their "total pollution foot print" for the life of the vehicle. the way they did that was to stretch recommended oil change interval (and coolant, gear lube, etc) out. win-win for the car makers: they can show the feds they have reduced "pollution", and if the tell you to change oil and coolant every 12,0000 miles, the car wears out faster, so they get to sell you a car more often. of course, there was no reduction in resources consumed if the car goes to the land fill sooner than it needs to. Figures it was the Federal government up to wrecking our cars.

My wife's Lexus has "lifetime trans fluid" per the owners manual, but most dealers are still recommending 30,000 mile AFT change, just like always. I have been on the forums for the Lexus, the transmission will just make it about 90k-100k before it fails without ATF changes (oweners were really mad about following factory recommendations). They appear to last indefinitely (250k-350k plus) with regular ATF changes.

reminds me of the oil companies, consider the amount of motor oil the would sell across the country if everyone changed at the 3000 mile interval they recommend (they would double their sales!). OTOH, if you follow the factory/government interval of 9000 miles, they will be selling you a new car more often. so both sides stand to gain if you follow their recommendations. I figure about 5K to 6K would be about right, but I change it based on condition of the oil on the dipstick (dark and slightly gritty, time to change it).
'87 Tercel 4wd SR5 (current engine swap project)
'84 Tercel 4wd (daily driver, with on going mods)
'92 Mazda MPV 4wd (wife's daily driver)
'85 Tercel 4wd DLX auto(daughter's daily driver)
'01 Honda Civic (other daughter's daily driver)
Top
Post Reply
27 posts